Next time you head to the airport in France there might be a robot waiting to pick up your car. French firm Stanley Robotics has been trialling its self-driving robot valets for a few years, and this week started its first full-time service at France’s Lyon-Saint-Exupéry airport.

The system works like this. Customers park their cars in special hangars where the vehicles are scanned to confirm their make and model. Then, one of Stanley’s robots — which are essentially self-driving forklifts named “Stan” — drives in, slides a platform underneath the vehicle, lifts it up, and carries it away and parks it.

Stanley Robotics say its system uses space much more efficiently than humans, fitting 50 percent more cars into the same area. This is thanks in part to the robots’ precision driving, but also because the system keeps track of when customers will return. This means the robots can park cars three or four deep, but then dig out the right vehicle ready for its owner’s return.

“We call it a valet parking robot because people just need to drop off their car at the entrance of the car park and then they can basically leave and catch a flight,” the co-founder and COO of Stanley Robotics, Stéphane Evanno, told Airport Technology in 2017. “[The robot uses] the same technology as self-driving cars; is able to scan its environment at any time, and react to anything that would be in the way.” 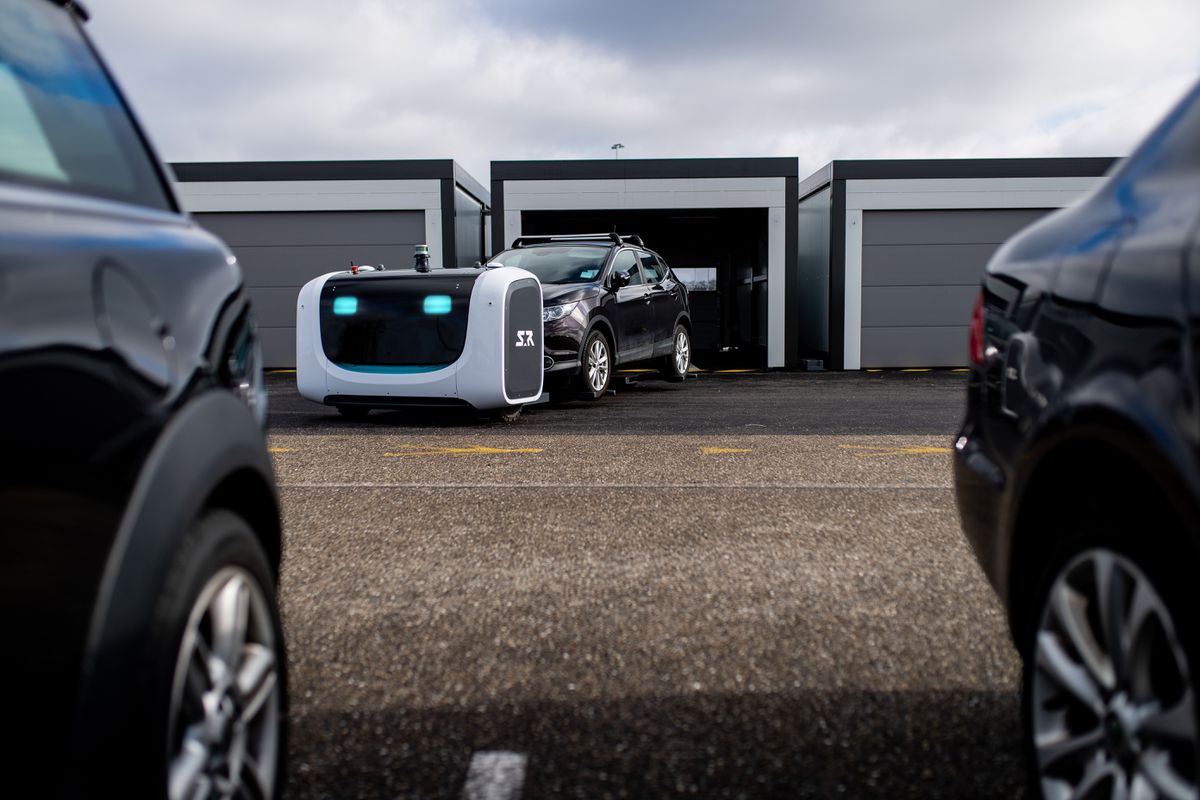 Stanley Robotics has held trials of its system in Düsseldorf and Paris’ Charles De Gaulle Airport, and is planning another test at London Gatwick this year. But the operation at Lyon-Saint-Exupéry — France’s fourth-busiest airport — will be its first full-time service.

The company won’t be taking over parking for the whole airport, just one section of its six regular lots. This covers 500 parking spaces, which will be serviced by four of Stanley’s robots, who will be able to park and retrieve up to 200 cars each day.

Stanley Robotics told The Verge that it eventually wants to expand its operation at Lyon-Saint-Exupéry to cover some 6,000 spaces, but that the time frame for this was “confidential.” The company also noted that for the time being humans would supervise the autonomous robots “to secure the operations and to track any malfunction in real-time.” In future, says the company, this supervision will be done remotely.

Interestingly, when checking prices for parking on Lyon-Saint-Exupéry’s website, the robot-valet option is pretty much the cheapest. It costs €54 ($61) to park for a week in the least expensive lot (furthest away from the airport terminals), or €55.80 ($63) to park in the same lot serviced by Stanley Robotics.

This price looks even better when you consider that to pay a human to park your car for you (albeit in a car park much nearer the terminals) prices start at €104 ($117).

Courtesy: This article was originally published in TheVerge.com