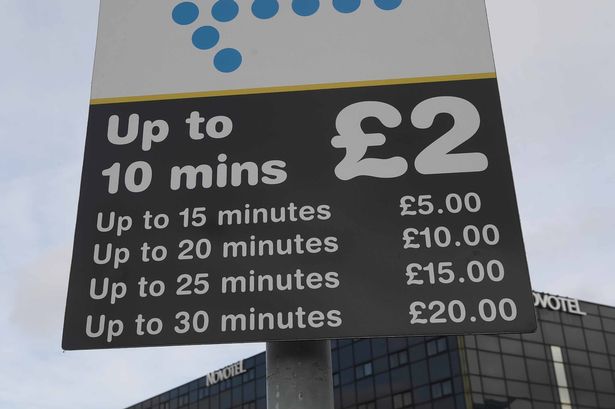 But the first customers to fall foul of the price hike were still faced with information presenting the old charges - and there was a fault with the barriers, too.

"There were a lot of angry people," he said.

"I'm sure they are not allowed to charge more than the advertised price.

"NCP told me it was the management.

"People were shouting at the staff.

"I was told they were going to make the change on Wednesday night but did it on Tuesday night, instead."

The sign still saying £2 for up to ten minutes even though taxi driver Brian Cox was charged £3 after the price went up overnight (Image: Darren Quinton / Birmingham live)

A Tweet from @aprivatehire said: "Your Express drop-off is a joke this morning the barriers are broken and we are also getting overcharged on the machines."

Hi, the tariff prices have now changed for the Premium Set Down car park, please view them here: http://socsi.in/33R63 . NCP are now on site at the departing barriers to fix the issue. Kind regards - Akeilah

Birmingham Airport replied on Twitter: "The tariff prices have now changed... NCP is now on site at the departing barriers to fix the issue. "

The 50 per cent increase applies to the first ten-minute banding only.

The charge for staying an extra five minutes to up to 15 minutes has been lowered from £5 to £3 - a 40 per cent decrease.

This News was published in http://www.birminghammail.co.uk on 20th Of March 2019